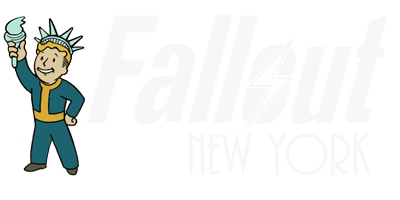 War never changes, it almost goes without saying by now. Not much is left of the human race after it chose to eradicate itself with atomic fire on that fateful October day in 2077. The end, many thought, had come. But it appeared to be no more than a clean slate. For what that's worth... Out of the rubble A once mighty society rebuild, in many shapes and forms. Old and new ideas resurfaced, But war... War never changes

You are a lone wanderer in the Empire Wasteland. A Northern frontier of these once mighty United States of America. And although you might think of it as cold, because of the certain "Hot Summer" from days past, the climate, even in winter is warm and sunny. This once incredible metropole now houses a variety of Societies:

'Sanford' a small residential block converted into a safezone and eventually a working community they typically advanced first aid for favors.

'The People's Republic of Chinatown' on the southside is a communist fortress of Red Chinese sympathizers, convinced that one day, their comrades will liberate them.

the 'Raiders Camp' above Queen's ruins is a force to be reckoned with, they are even in the posession of a working prewar Humvee!

'Broadway & Timesquare' are now the center of town, really. Enjoying working electricity, think of it as a smaller New Vegas, filled with theater and casino joints. If you're looking for vice and leisure, you've come to the right place.

'Governor' based on Governor Island is a settlement with a clinic, a research center owned by a mysterious doctor who rarely leaves the island... Then again, most people who go there never come back.

The rest of this world is not worth mentioning or will be added to, by the power of YOUR imagination. (Which I hope will remain within reason). Remember that all of you have a 'pipboy' which can be used for all sorts of handy things. a Map, Radio, Healthstatus, Date, Inventory Measurement... Is there anything that thing can't do? On the other hand, it is completely up to you on how you will proceed in this hostile wasteland.

2. The Races you can be: Human,Ghoul, Android, Beastlord, Dwarf but not Supermutant.

3. You can have a pet, domesticated Molrat or Dog, choice is yours.

4. Don't get too many characters

7. Guns and Gun wounds work like real life. You cannot survive three bullets to the head...etc. Armored characters be it metal or skin obviously have the edge.

8. New Frontier, New Characters... I count on you people to interact with our self-made NPCs. They don't need a backstory per sé.

9. Any body of water outside Central Park is irradiated and deadly.

10. No random Teleportation, however the Metro lines (the big M's on the map) serve as fast travel points.

11. You can be any faction that already exists but also create a new one. But if you do, make it credible. We don't need a billion 'new orders' and 'secret societies'.

Existing nationwide factions: The Brotherhood of Steel and The Enclave. No NCR here! (obviously)

12. A.R.C., Enclave Radio and PRCT are the only known Radio Stations in the Empire Wasteland so far...

(edited by The Retroriffic Man)
0
"Slavers don't keep prisoners for long? That is the whole point of them.."
(edited by Eilonwyn)
0

"Not in one camp, they usually sell them on..." Naomi pointed out, turning her attention back to the horizon.

"Can we just go find her now? I want to get her back alive." Morgan sighed, glancing to the horizon herself.

"Agreed."  Rook, stepping up next to Morgan as they walked.  "Let us continue."

(edited by Psychomantis108)
0
"You should take point Rook." Morgan offered. "You're our greatest fighter."
(edited by Eilonwyn)
0

"I can pick out targets from here fine."  Rook said.  "I do not need to stand out front."

"I know, Rook." Morgan grunted. "But you are the one with actual defense."

"This is Maxy pouring liquid divinity into your earhole..."

"Okay, that one didn't really work."

"Regardless, here's Little Richard's Rip It Up ()"

(edited by The Retroriffic Man)

What do you think?